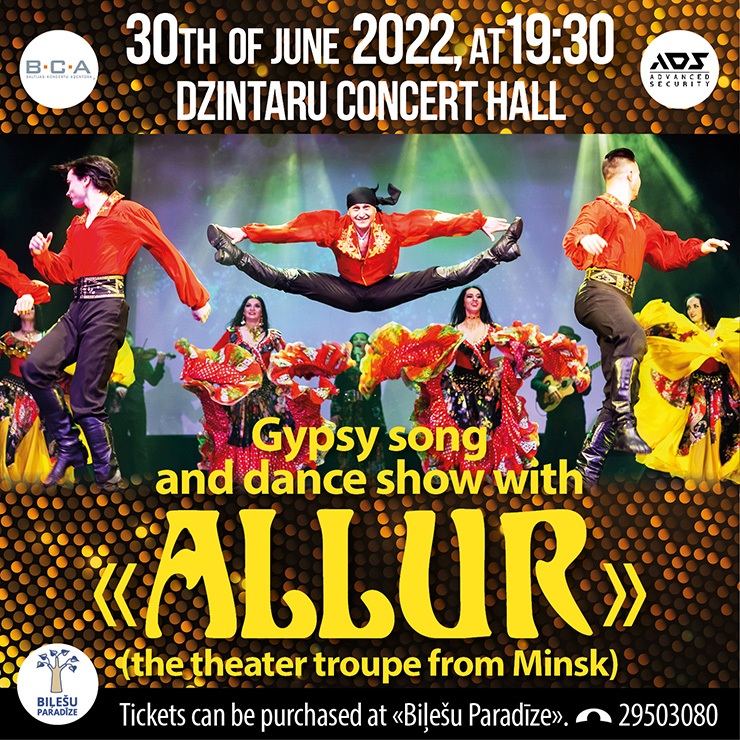 Gypsy song and dance show with "Allur" (the theater troupe from Minsk).

Created more than 17 years ago by Ludmila Rodionova, the theater troupe is a participant of various iconic festivals and concerts. Among them is the famous international art festival "Slavyansky Bazar in Vitebsk". The creative group was lucky to perform together on the stage with such world stars of the show as Cabaret Chicago, Moulin rouge, Riverdance, Flamenco. &quot;Allur&quot; went on tour in Tenerife three times. They were giving their concerts in Moscow, Riga, Daugavpils, Rezekne, Ventspils, Liepaja, Kaliningrad, Chernihiv and in many other cities. “Allur” participated in a concert of Belarusian artists for the 60th anniversary of Israel in Tel Aviv. At the Sports Palace or
the Palace of the Republic in Minsk are held great solo concerts every year. As part of the musical evenings at Mir Castle, traditionally hosted by TV channel ONT, “Allur’’ also gave a great two-hour concert.
​
To date, the creative palette of their performances is very wide, which allows to be interesting and popular not only among those who are close to the Gypsy songs, but also those who love different styles and trends in song, music and dance art. At the moment, the team has several creative programs from the series “Songs and dances of the People of the World”, as well as the author’s program from their own musical works.
​
On 30 th of June 2022 at 19.30 they will present their most popular program-show of gypsy songs and dances in a large two-hour concert in the Dzintari concert hall. Colorful costumes, dynamic performance, vivid effects and more than 20 artists on the stage at this show. All performances are made in the original arrangement of Sergei Rodionov and are accompanied by original choreographic productions with elements of theatricalization and interactivity.
​
Come to get a real pleasure from the creativity of talented artists of the “Allur” show,
and you will definitely not regret it!